Movies Filming in Atlanta this Summer

With summer’s arrival comes big summer movie filming news. Despite the rain, heat, and traffic, production is out and about, and it’s hard to cross town without seeing at least one yellow sign. There are some big movies and even bigger stars in Atlanta right now, so let’s get to it.

A lot of production for this one has been at Pinewood Atlanta Studios in Fayetteville. But there was a set downtown between June 1 through 3, as well as outdoor filming in Fayetteville on the 21st. This past Monday, crews took over a block in Fairlie Poplar and filmed a fight scene. Despite the incredible urge, don’t stalk this film. Security will be tight, and Officer Friendly doesn’t care about your dream of taking a selfie with Iron Man. Like every active set you might encounter, watch from afar, out of the way. 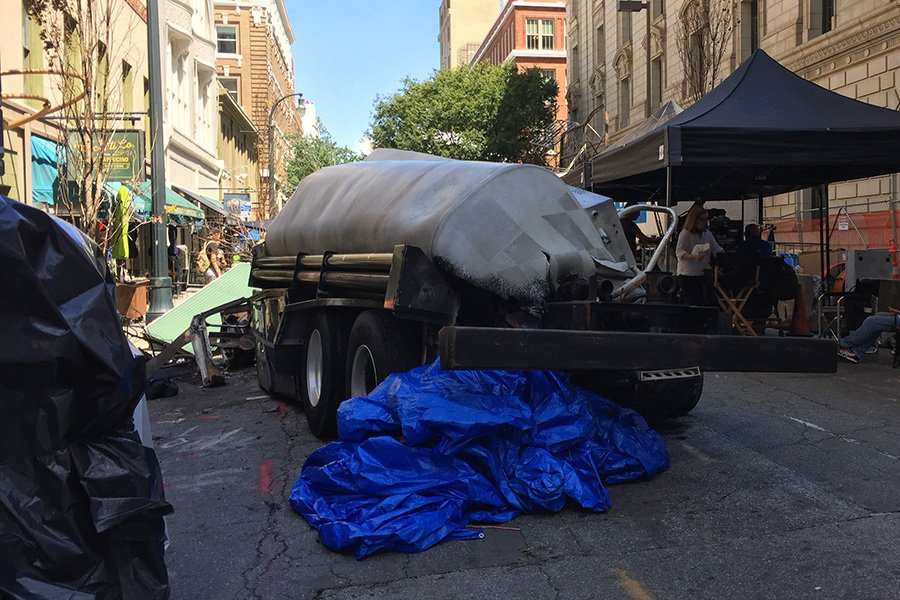 Another big production hiding in the shadows is Godzilla: King of the Monsters (FATHOM).Starring Vera Farmiga, Stranger Things’ Millie Bobby Brown, and Bradley Whitford, this movie’s pretty much kept to the studio this month. If you do stumble across any FATHOM signs, however, know that you’re getting close to a kaiju.

Dwayne Johnson’s Rampage (R-19), also starring Jeffrey Dean Morgan and Malin Akerman, continued shooting this month. The film, centering around the 90s era video game of the same name, ended May in Gainesville. On June 7, crews were back there again before moving to Madison between the 12th and 13th. Signs were spotted on Cobb Parkway and McCollum Parkway on June 14. A big outdoor set was built around the 17th, at Third Rail Studios, visible from the Doraville MARTA station’s platform. Between the 19th and the 20th, Rampage took over the Atlanta Zoo. Most recently, crews are filming again at Third Rail Studios in Doraville.

Remember the Step Up film franchise? Well, it’s getting a TV series starring singer Ne-Yo, Glee‘s Naya Rivera, and Faizon Love. YouTube is producing the show for its YouTube Red premium service. Work on the series started production this month. Step Up: High Water (SUP) had signs plopped off of Joseph E Lowery Boulevard and West Marietta Street and off of Ellsworth Industrial Boulevard and Chattahoochee Avenue on June 6.

Yet another TV series, The Passage (PSG), based on a novel by Justin Cronin and starring Brianne Howey, Zach Appelman, and Brad Brinkley has also come to town. The show will focus on a post-apocalyptic world set into motion after a government experiment turned a group of death row inmates into vampires. (Oh, and there’s an orphaned girl who might be the key to reversing everything. Because of course there is.) The Passage had a basecamp off of North Avenue and Northside Drive on June 8. Four days later, production moved to Braselton. On the 16th, crews worked out of Union City. Continuing the bounce around, the show shot in Douglasville on the 19th, Lithia Springs on the 20th, and back in Union City for June 26.

If you live on the south side, well, maybe on the far south side, you might spot Amy Adams. She’s filming a new HBO series, Sharp Objects (SO), in Georgia. While most of the production’s month-long principle photography will be in Barnesville, on June 21, the show made it as far north as McDonough. Sharp Objects is about a reporter returning to her hometown to cover a violent murder, only to have her own emotional demons creep up.

Tag (S&K), another new addition starring Annabelle Wallis, Isla Fisher, Jeremy Renner, and Rashida Jones, arrived in June. This one’s a comedy about a group of friends that partake in an annual game of tag so massive, it requires cross-country travel for some. On June 21, a basecamp was spotted at St. Andrew’s Presbyterian Church on Lavista Road in Tucker. Between the 22nd and the 23rd, signs were spotted in Johns Creek off of Old Alabama Road near Newtown Park.

A Bad Moms Christmas (ABMC), starring Mila Kunis, Kristen Bell, and Kathryn Hahn, continued filming in June. At the end of May, signs were placed on Bolton Road, leading to a basecamp at Marietta Road. Between June 3 and 4, filming took place at Oglethrope University. On the 13th, there were signs up at Spring and 12th Streets for a nearby grocery store scene. On May 16, more signs were spotted off of Memorial Drive, near Home Grown GA. Filming took place downtown, near Fairlie Poplar, on May 19.

The War with Granpda (MARRO), starring Robert De Niro and Uma Thurman, was in Midtown on June 6. On the 8th, they were at Gwinnett Place Mall, one of the filming hot spots from last month.Between June 9 and 12, crews worked in and around Chamblee.

Also seen around town: Halt and Catch Fire (HCF) shot in Avondale Estates on May 31. Also on May 31, The Walking Dead (SF) took over a house in Fayetteville. John Cena’s The Pact (PCT) was downtown at the Hyatt Regency on May 31, in Duluth on June 1, and in Buckhead on June 13. Stan Against Evil (RadicalMedia) shot in Lithia Springs on June 3 and was in downtown Douglasville on June 6. Darkest Minds (PSI) filmed Gwinnett Place Mall on June 2.

And finally this month, Sony Pictures is moving ahead with a Spider-Man villain spinoff, Venom. The project will be filmed here and in New York. What’s not entirely clear is how this movie will fit, if at all, with the greater Disney-owned Marvel Cinematic Universe. Traditionally, Spider-Man was not a part of the MCU, due to the fact that Sony owns the film rights to the Marvel superhero. A deal allowed Spider-Man to appear in Captain America: Civil War and the upcoming Spider-Man: Homecoming. Collidereven asked Peter Parker himself, Tom Holland, about the rift, and his answer certainly pointed to a probable divergence in the Spider-Man universes. In the same interview, Marvel Studios President Kevin Feige and producer Amy Pascal offered conflicting reports of whether Venom would tie into the MCU, further muddying the waters. We do know, however, that Venom is set to release in 2018 and is not currently listed as a part of Marvel’s grand MCU plan. A yet-to-be-titled sequel to Spider-Man: Homecoming, however, releasing in 2019, is listed.

For now, according to Collider, Tom Holland’s Spider-Man will not be appearing in Venom or any of the other Spider-Man franchise films Sony has planned, but that could easily change. If it does, we might have to live in a world with a MCU Spider-Man and a Sony Spider-Man. That seems par for the course for a franchise that has been rebooted more times than a virus-ridden PC. Whatever does end up happening with Venom, we’re just glad to have another blockbuster shooting in our neck of the woods.